The "French disease" spreads into Belgium.

Why Macron is disliked, sometimes even hated

Answering that question is delicate, because it's all too easy to project one's own opinions rather to try to assess those of the majority.

A bit of context first
- Macron is the 3rd president here whose popularity took a sharp nosedive rather shortly after his election. However it was less severe with Sarkozy (2007-12), and Macron's case is already as serious as Hollande's (2012-2017). Also, by contrast with his predecessor who was widely mocked and despised, the feeling against him is much more intense, often verging on pure hatred
- He was elected as the result of total upheaval of French political system, a wave of "oustism" which led to the largest left party (Hollande's) being reduced to small one, largest rightist party failing to capitalize on the opportunity, two major new "populist" forces gaining (left wing and right wing). He used to be Hollande's minister for Economy, but he was not a professional politician, he created a new movement from naught, and gained the presidency

So the first thing is that the French political system entered major turbulences about at the same time as America's, however with a different result. Political system has totally changed and is now 4-party: the old rightist party, two populist parties, Macron's new party.

It could be that this upheaval just has not yet come to an end, with Macron's election as a mere provisional result, the eventual outcome still in the future. Under the surface, strong currents are still powerful. They have now emerged again - with a vengeance. Seen in this way, it's not only about Macron. He is just the one holding the candle when all hell breaks loose, but it was long in coming.

But then there seem to be other reasons too
- He was the newcomer who promised to do things differently. He definitely raised hopes (albeit not of everybody). Disappointment can be all the more damning, especially now that it's clear that unemployment (our most major issue) is not going down, while taxes on the less wealthy are going up
- He was denounced before his election, and has confirmed since, that he is "president for the wealthy". Not all taxes have gone up, you see... If you're wealthy, you're now paying less. Quite understandably, a lot of French feel they have been had, or that their fears about Macron have been confirmed
- He is not a very good actor, and he sometimes let the smooth and well-meaning mask slip off his face. Behind the mask: pure contempt for whom is not wealthy and/or very educated. Hillary Clinton did one count of "deplorables" comment, and it cost her dearly, probably the White House. Emmanuel Macron is now at five counts (minimum, I might be forgetting some), he seems to really have trouble getting a hold of himself.

French people of lower or middle-lower class extraction are faced with a president who
a) puts more taxes on them, while
b) making gifts to wealthy ones, and to top it off
c) insults them
Little wonder that they dislike him strongly!

What is new and remarkable is
1. That they react so forcefully and with such determination (it's been several weeks now). The original reason - increased tax on fuel - was probably not so important, more like "the straw that broke the camel back". But the anger, and for a small part of them the violence, is unprecedented
2. That they are supported by a majority of French, 72% at last count, including 56% of white-collar workers (I'm one of those 56%

). This is probably a manifestation of our equalitarian trait (Liberté, Egalité, Fraternité is the French Republic's motto), the one who has a good-paying job is of course happy to have good financial prospects, but he doesn't want the lower paid or the unemployed to be totally crushed. The idea that everybody should have a dignified life is important

Where do we go from here?
I don't know. The only way out is for Macron to change his project so as to put the objective of "dignified life for all" first. That would need something like a conversion for him.

On the other hand, I'm not sure if he has much of a choice. His ratings are continuously going down (21% satisfied at last count), his tricks to end the demonstrations are not efficient... and one cannot lead a country in a direction where it doesn't want to go

The very short term concern is what will happen in Paris next Saturday, for what the demonstrators call "Act 4", and also in other cities. There are worrying signs of serious violence to come, possibly with firearms. Many are telling the Yellow Jackets to "calm down"... but you don't have to be a psychologist to know this is the very last thing to say to somebody who is enraged

Macron has indicated that he would address the Nation, but only after this "Act 4".
Top

That's true, although it's a bit funny that so many people were duped into thinking that voting for a New York City billionaire was somehow a way to stick it to the elite. 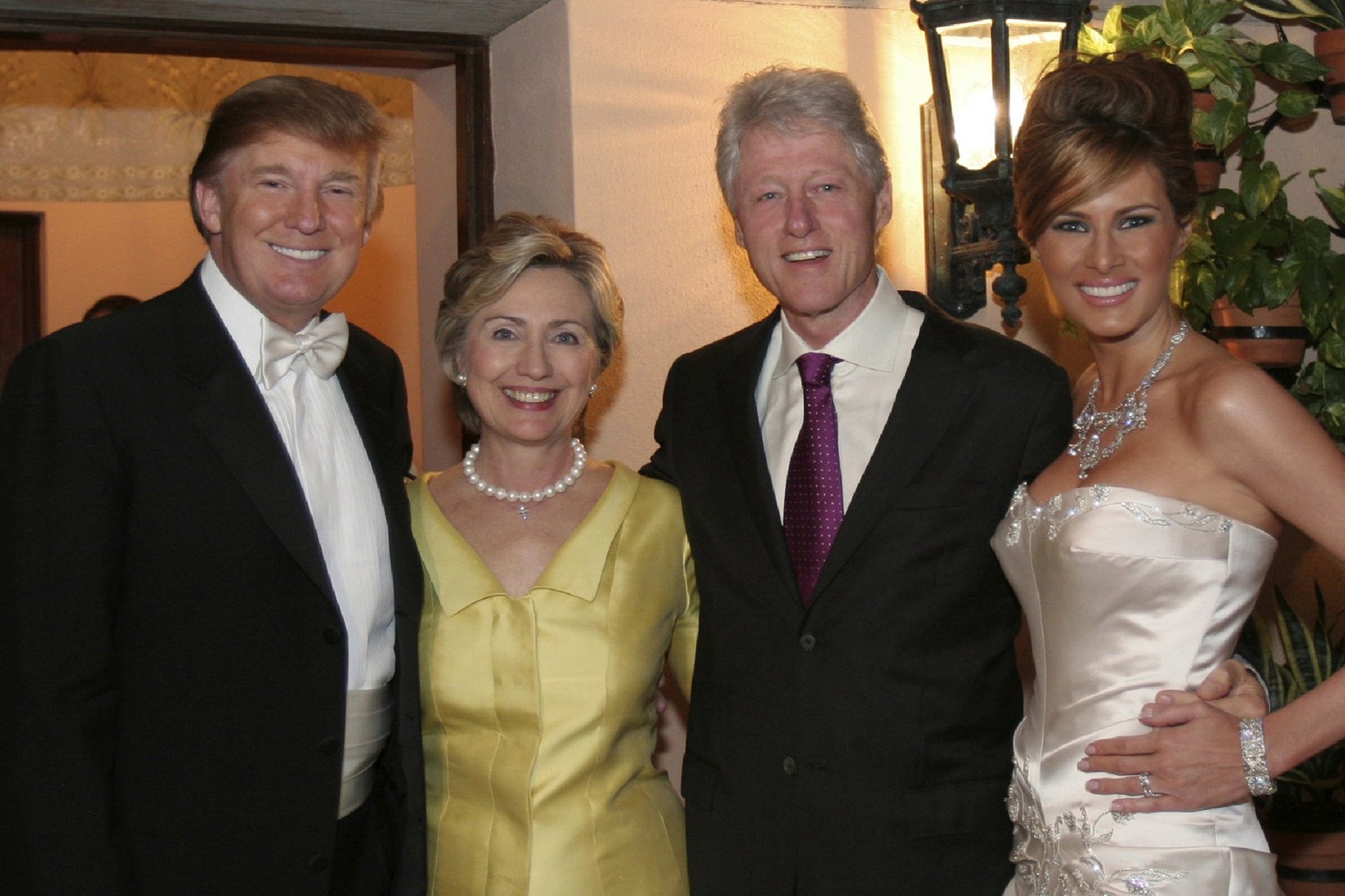 The Clintons were hated by the elite back then. Remember Al Gore said he didn't need any help from the Clinton's when he ran against Bush.

He didn't mean it, he just said it to try to look strong in his own right. And he was wrong, now, wasn't he? Either way, it hardly means the Clintons weren't elites, especially when Bill Clinton was coming off a two term presidency and Hillary Clinton was being elected to the U.S. Senate.

You are missing my point Steve Trump was never accepted as a member of the elite. He is far to crude, direct, and too willing to get his hands dirty, for them to accept him. He has spent his life sticking it to them. The Clinton's when they left office were hated by at least the DC establishment. They felt he sullied the reputation of **their** city. But since the Clintons have made enough of them rich and therefore powerful, that they are willing to over look past transgressions.

Bottom line is that, billionaire or not, Trump will never be one of them. He knows that, so act accordingly.
“"I fancied myself as some kind of god....It is a sort of disease when you consider yourself some kind of god, the creator of everything, but I feel comfortable about it now since I began to live it out.” -- George Soros
Top

Neverfail, I can't leave you without this analysis, much more informed than what a mere Frenchman like me can manage.

It's from Fox News.

Thanks so very much for the pains you have taken to inform me. You are right! It is a complex scenario.

The American War of Independence started out as an objection to taxes imposed without the consent of the locals and from that point on the revolt grew and grew. Like the tea tax and Stamp Act on the Americans back in the 1770's, Macron's fuel taxes seem to have been the "trigger" to an eruption of other grievances that had been simmering below the surface; probably for years.
Top

The AP headline is a bit misleading


BRUSSELS (AP) - Belgium's political crisis eased somewhat on Wednesday after the biggest coalition partner said it would remain in the government despite its opposition to a U.N. migration pact that the others back.

Prime Minister Charles Michel has taken the treaty to parliament for approval, against the wishes of the right-wing N-VA.

There had initially been fears that the party would pull out of the government following the vote, but it said too many other economic and social issues are still on the plate to abandon the coalition, five months ahead of elections.

Here is an example of what Yellow Jackets exchange on social media:

"On December 8th
Everybody in Paris for the
Final Storm
against Macron
Share it!" 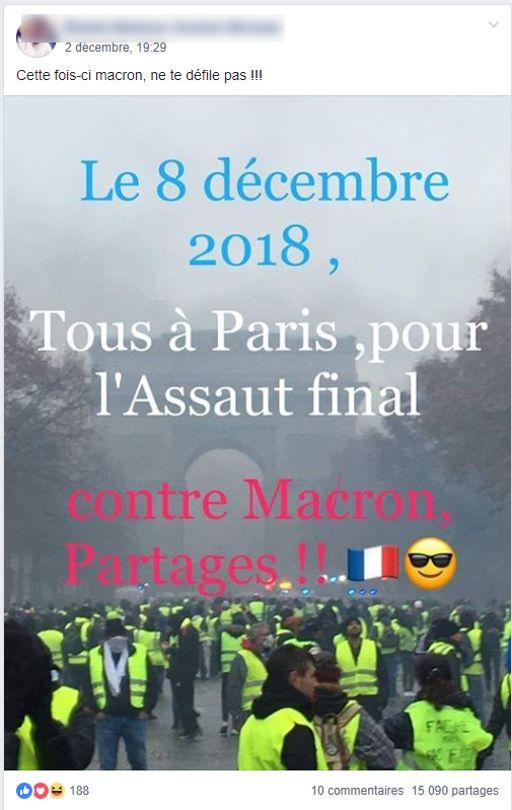 Heh, I'm so used to parliamentary systems that I forget this sounds to Americans like there's civil war and rioting in the streets.

Heh, I'm so used to parliamentary systems that I forget this sounds to Americans like there's civil war and rioting in the streets.

Actually there is rioting in the streets in Belgium, and the PM there has taken a courageous decision.

Re: Example of Yellow Jackets propaganda

"On December 8th
Everybody in Paris for the
Final Storm
against Macron
Share it!"

The Yellow Jackets make a racket?