The Great American Oil Bust started in mid-2014, when the price of crude-oil benchmark WTI began its long decline from over $100 a barrel to, briefly, minus -$37 a barrel in April 2020. Bankruptcies of US companies in the oil and gas sector started piling up in 2015. In 2016, the total amount of debt listed in these filings hit $82 billion. Bankruptcy filings continued, with smaller dollar amounts of debt involved. In 2019, the shakeout got rougher.

And this year promises to be a banner year, as larger oil-and-gas companies with billions of dollars in debt collapsed, after having wobbled through the prior years of the oil bust.

The 44 bankruptcy filings in the first half of 2020 among US exploration and production companies (E&P), oilfield services companies (OFS), and “midstream” companies (gather, transport, process, and store oil and natural gas) involved $55 billion in debts, according to data compiled by law firm Haynes and Boone. This first-half total beat all prior full-year totals of the Great American Oil Bust except the full-year total of 2016: 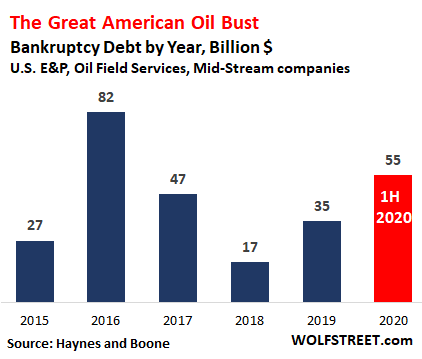 The cumulative amount of secured and unsecured debts that the 446 US oil and gas companies disclosed in their bankruptcy filings from January 2015 through June 2020 jumped to $262 billion: 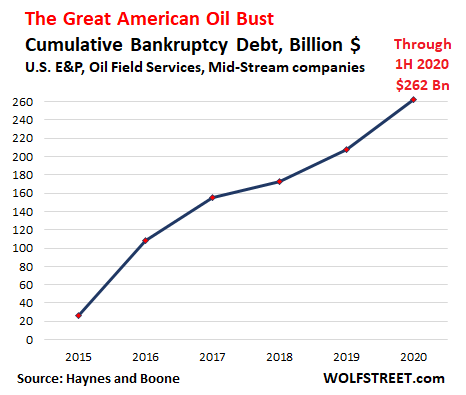 The three biggies: In the first half of 2020, nine of the 44 US oil and gas companies that filed for bankruptcy listed over $1 billion in debts, including the three biggies with debts ranging from $9 billion to nearly $12 billion, according to data by Haynes and Boone.

These three companies – oil-field services companies Diamond Offshore and McDermott and natural-gas fracking pioneer Chesapeake – are the biggest in terms of debts that have toppled in the Great American Oil Bust so far. Those three companies combined listed $31 billion in debts, accounting for 56% of the $55 billion in total debts listed by all 44 companies to file so far this year:

Bankruptcy epicenter is in Texas.

Since 2015, there have been 239 bankruptcy filings by oil-and-gas companies in Texas – the largest oil producing state in the US – of the 446 total US filings. So far this year, Texas accounts for 39 filings of the 44 total filings in the US.

Of note, Chesapeake is headquartered in Oklahoma, but it filed in U.S. Bankruptcy Court for the Southern District of Texas and counts as a Texas bankruptcy.

Delaware’s major industry is not oil and gas, but coddling corporations, and many oil-and-gas companies are incorporated in Delaware and they’re filing for bankruptcy in Delaware – hence the state’s second place among states with the most oil-and-gas bankruptcy filings since 2015:

The price-collapse of crude oil and natural gas.

The Great American Fracking Bust took on absurd proportions when the price of WTI in the futures market plunged to minus -$36.98 on April 20, 2020, in an epic WTF moment for the entire oil industry. Since then, the price has bounced off and currently trades just over $40 a barrel, where the US fracking industry is still burning large amounts of cash: 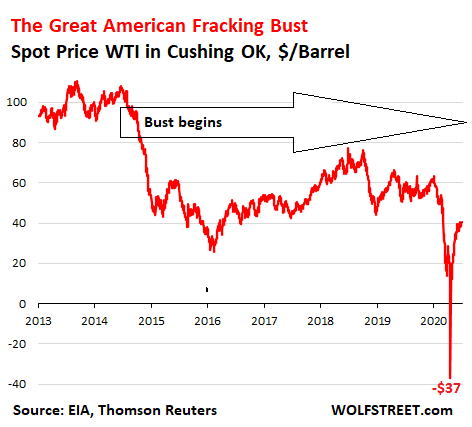 Fracking has turned the US into the world’s largest producer of natural gas. The flow of cash into this sector has been epic. Chesapeake was on the forefront here, both in terms of boosting natural gas production and in terms of bamboozling investors into handing over billions of dollars that it then efficiently burned year after year.

The ensuing natural-gas glut has crushed the price of natural gas – despite enormous efforts and investments to export natural gas via pipelines to Mexico and via LNG export terminals to the rest of the world. But whenever there was new demand, it was out-powered by higher production as the cash kept pouring in, and the price continued to fall, currently at $1.83 per million Btu: 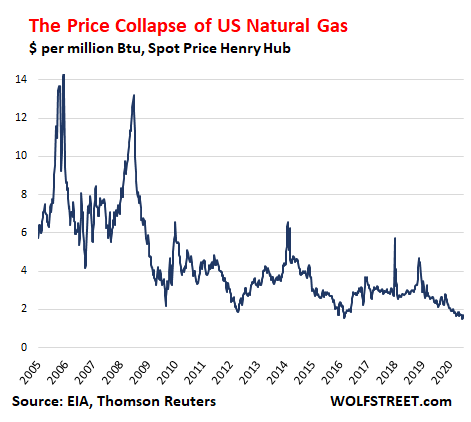 There have been side effects too. The crushed price of natural gas – plus the arrival in the 1990s of a technical innovation, the highly efficient combined-cycle gas turbine for power plants (GE’s explanation) – began a process whereby coal could no longer compete on price with natural gas for power generation.

New natural-gas-fired power plants were built, coal-fired power plants were retired. Demand for thermal coal collapsed, as did the price. Eventually all major coal mining companies filed for bankruptcy, a bunch of them twice. That was collateral damage of these billions of dollars of investor cash that kept flowing into fracking.

Surviving in this pricing environment for overleveraged permanently cash-flow negative companies in the fracking business has proven to be tough – and for investors, who kept buying their hype over the years, it has turned into a massacre.

Investors have not only poured billions of dollars into supplying these companies with debt capital – including the $262 billion listed in bankruptcy filings since 2015 – but also into supplying them with equity capital as these companies sold new shares to raise money, and these billions in equity capital have now disappeared without trace. Those billions from those share sales don’t even get mentioned in bankruptcy filings.

This is what happens when the US messes with Russia and Saudi Arabia.
Top

Re: The Great American Oil Bust

This is in a way old, stale news Sertorio as these bankruptcies have been going on for years.

They do not refer to the long established oil majors, the likes of Exxon or Mobil - which I believe are still doing well; but to the smaller firms that scrambled into the shale fracking rush several years ago and in the majority of cases funded their exploration and development activities with borrowed money (normal even for larger, more solvent firms in the same business). At the time with global oil shortages and resultant high proces the investment of such large amounts of risk capital would have looked like a good bet.

But cheer up! While the boom lasted these firms served the useful purpose of restoring oil and gas self-sufficiency to the United States for the first time in half a century. By subtracting the USA as a major buyer from the global oil market, well of course the world price of crude oil declined (to the benefit of all countries devoid of domestic oil production, including Portugal).

Many of these indebted firms will of course fold but so what? Companies come and companies go but the oil and gas wells along with the pipeline delivery infrastructure are now with the United States for as long as the hydrocarbons last.
Top
Post Reply
2 posts • Page 1 of 1