It landed on a pre-selected landing zone in the southern part of an icy area of the planet known as Utopia Planitia at 7:18 a.m., the scientific research team confirmed with the signal sent back by the rover, the first landing on an exoplanet ever by a Chinese vehicle. 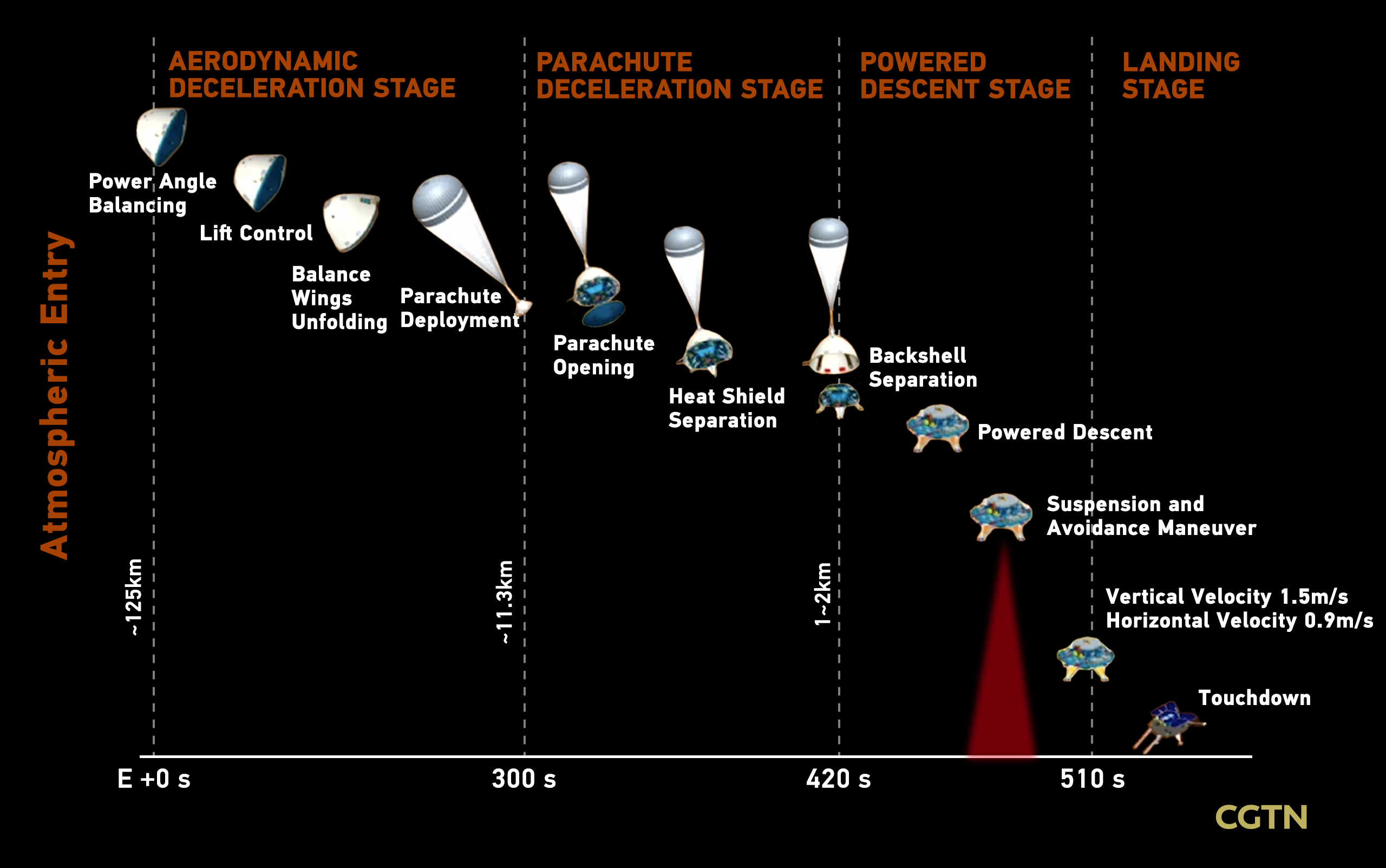 The probe started descending from its parking orbit at about 1 a.m. and maneuvered to the entry orbit. The landing module, consisting of the lander and the rover Zhurong, separated from the orbiter at about 4 a.m., according to the CNSA.

After about three hours' flight, the module entered the Martian atmosphere, ushering in the most challenging moment.

The whole landing process can be divided into three steps, namely entry, descent, and landing.

The module first decelerated with the friction of the Martian atmosphere, a process in which it overcame high temperatures and attitude deviations, said Wang Chuang, chief director-designer of the Tianwen-1 probe with the China Academy of Space Technology.

The descent speed reduced by about 90 percent after the aerodynamic deceleration.

Then, the parachute was unfurled to continue reducing the velocity to 100 meters per second before the reverse thrust engine ignited to decelerate the speed, Wang introduced.

At about 100 meters above the surface of Mars, the module entered the hovering stage for completing the obstacle avoidance and measuring the slopes of the surface. The craft reached the Martian surface under the protection of a buffer mechanism.

In all, during the whole process lasting for about nine minutes, the module had to slow down from a velocity of about 20,000 kilometers per hour to zero, said Wang. 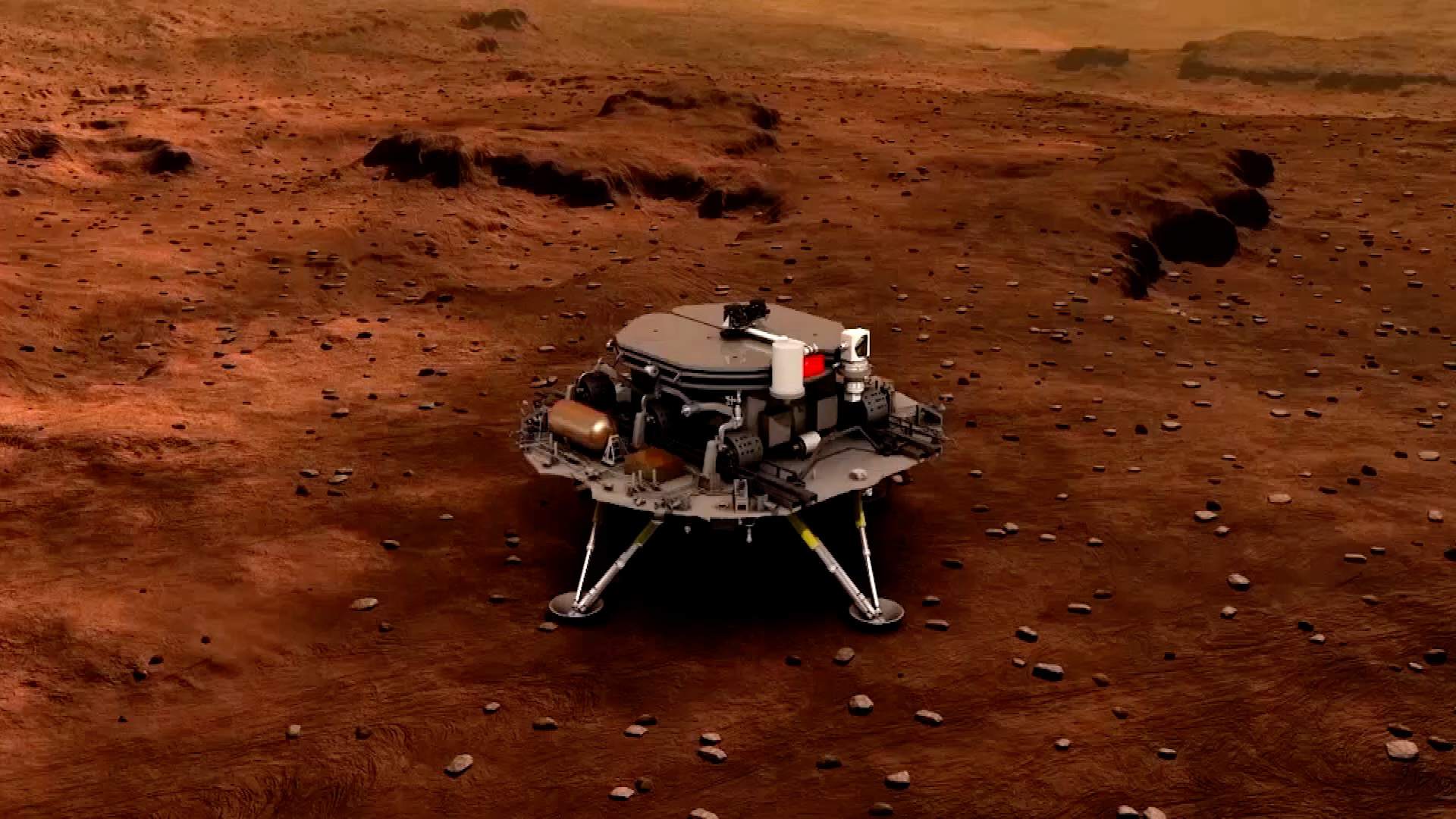 An illustration of the Tianwen-1 landing module. /CNSA

About 30 minutes after separation, the orbiter returned to the parking orbit to provide relay communications for the landing module.

Zhurong packed with 6 payloads for expedition

Named after the Chinese god of fire Zhurong, the rover will carry out imaging of the landing site, self-check and depart from the landing platform for further expedition.

They are expected to provide first-hand materials for research on Mars space environment, surface topography, and soil surface structure, among which, meteorology-related research will collect atmospheric data on temperature, pressure, wind speed and direction, as well as the magnetic and gravitational fields on the planet.

Facing the dusty environment on the planet, designers used a new dust-proof material for the rover, and even if the rover gets dirtied with the Martian dust, it can shake it off with vibration.

They also kept an identical copy of Zhurong the rover in the lab. If the rover encounters any problem on Mars, the ground crew will conduct simulations for a resolution before issuing instructions to the rover on Mars.

He added that "Together with the global science community, I look forward to the important contributions this mission will make to humanity's understanding of the Red Planet."

China launched the Mars probe, which consists of an orbiter, a lander and a rover, on July 23 last year, aiming to complete orbiting, landing and roving in one mission.

The probe entered the parking orbit on February, where it undertook a global remote sensing survey of the planet for nearly three months with its cameras and spectrometers checking the pre-selected landing site and weather for landing.

So far, the probe has been in space for 295 days and is about 320 million kilometers from Earth.


Compared with American extraordinary performance on Mars, this may seem small and uninteresting, but it shows very remarkable Chinese capabilities on planet exploration, and seems to indicate future actions which may surpass the US ones, such as bringing Martian soil samples to Earth. Both countries deserve our warmest congratulations.
Top

As Zhurong Mars rover embarks on its mission to explore the surface of the Red Planet for at least 3 Martian months, approximately 92 days on Earth, the chief designer of China's first Mars exploration mission shared the vision for the next goals under a national plan called "planetary exploration," which is to send more Tianwen-series probes to planets, including Mars and Jupiter, to collect samples and carry out key technology research.

And that may happen a lot sooner than most people think. I have a feeling that China will do it sooner than the US.
Top

Rolling On to Mars...

Compared to the American successes this doesn't seem like much, but you should consider how long it took China from the first satellite to landing a rover on Mars...
Top

Some of the first pictures taken on Mars: 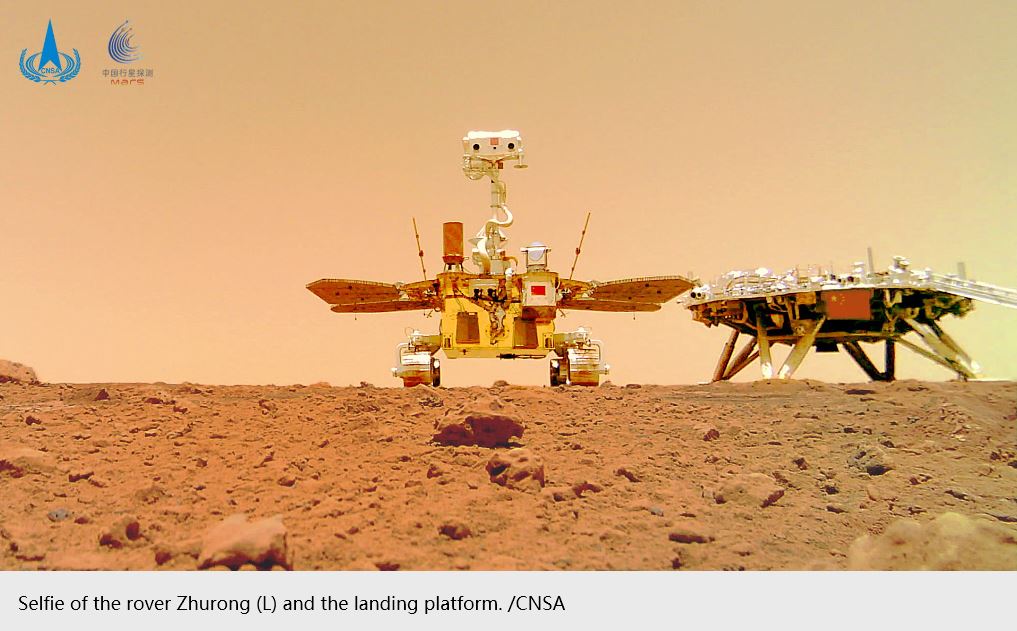