THE CCP IS THE VIRUS

THE CCP IS THE VIRUS 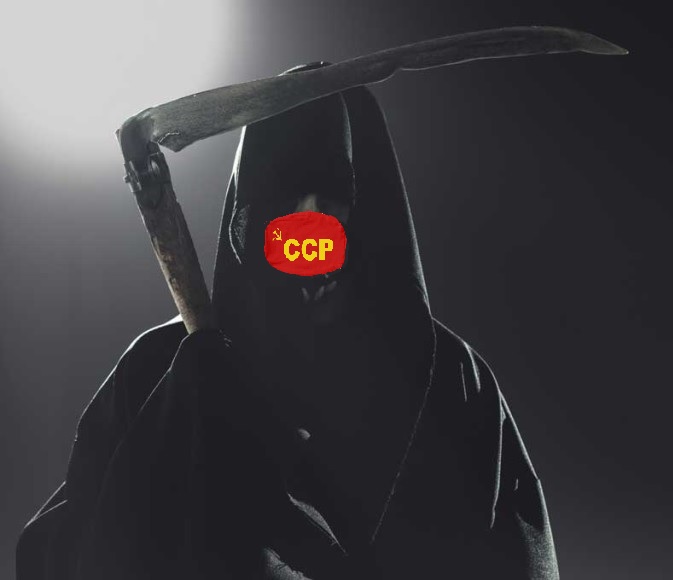 Scientists at Wuhan lab were on massive project investigating animal viruses
Documents obtained by The Mail on Sunday have revealed a nationwide scheme
It was being directed by leading state body, which was launched nine years ago
Its aim was to find new viruses and detect 'dark matter' of biology involved in spreading disease - alongside military officials, despite denials of any such links

By Ian Birrell for The Mail on Sunday

Scientists studying bat diseases at China's maximum-security laboratory in Wuhan were engaged in a massive project to investigate animal viruses alongside leading military officials – despite their denials of any such links.

Documents obtained by The Mail on Sunday reveal that a nationwide scheme, directed by a leading state body, was launched nine years ago to discover new viruses and detect the 'dark matter' of biology involved in spreading diseases.

One leading Chinese scientist, who published the first genetic sequence of the Covid-19 virus in January last year, found 143 new diseases in the first three years of the project alone.

The fact that such a virus-detection project is led by both civilian and military scientists appears to confirm incendiary claims from the United States alleging collaboration between the Wuhan Institute of Virology (WIV) and the country's 2.1 million-strong armed forces.

The scheme's five team leaders include Shi Zhengli, the WIV virologist nicknamed 'Bat Woman' for her trips to find samples in caves, and Cao Wuchun, a senior army officer and government adviser on bioterrorism.

Prof Shi denied the US allegations last month, saying: 'I don't know of any military work at the WIV. That info is incorrect.'
Colonel Cao Wuchun, a WIV adviser
+3

Yet Colonel Cao is listed on project reports as a researcher from the Academy of Military Medical Sciences of the People's Liberation Army, works closely with other military scientists and is director of the Military Biosafety Expert Committee.

Cao, an epidemiologist who studied at Cambridge University, even sits on the Wuhan Institute of Virology's advisory board. He was second-in-command of the military team sent into the city under Major General Chen Wei, the country's top biodefence expert, to respond to the new virus and develop a vaccine.

The US State Department also raised concerns over risky 'gain of function' experiments to manipulate coronaviruses at the Wuhan lab and suggested researchers fell sick with Covid-like symptoms weeks before the outbreak emerged more widely in the Chinese city.

Last month, Britain, the US and 12 other countries criticised Beijing for refusing to share key data and samples after a joint World Health Organisation and Chinese study into the pandemic's origins dismissed a lab leak as 'extremely unlikely'.

'They are still not being transparent with us,' she said. 'We have no hard data on the pandemic origins, whether it was a natural spill-over from animals or some kind of accidental research-related leak, yet we're unable to get straight answers and that simply does not inspire confidence.'


The documents obtained by The Mail on Sunday detail a major project called 'the discovery of animal-delivered pathogens carried by wild animals', which set out to find organisms that could infect humans and investigate their evolution.

It was launched in 2012 and funded by the National Natural Science Foundation of China. The project was led by Xu Jianguo, who boasted at a conference in 2019 that 'a giant network of infectious disease prevention and control is taking shape'.

The professor also headed the first expert group investigating Covid's emergence in Wuhan. He denied human transmission initially, despite evidence from hospitals, then insisted in mid-January 'this epidemic is limited and will end if there are no new cases next week'.

One review of his virus-hunting project admitted 'a large number of new viruses have been discovered, causing great concern in the international virology community'.

It added that if pathogens spread to humans and livestock, they could cause new infectious diseases 'posing a great threat to human health and life safety and may cause major economic losses, even affect social stability'.

An update in 2018 said that the scientific teams – who published many of their findings in international journals – had found four new pathogens and ten new bacteria while 'more than 1,640 new viruses were discovered using metagenomics technology'. Such research is based on extraction of genetic material from samples such as those collected by Prof Shi from bat faeces and blood in the cave networks of southern China.

Such extensive sampling led to Prof Shi's rapid revelation last year of RaTG13, the closest known relative to the new strain of coronavirus that causes Covid.

It was stored at the Wuhan lab, the biggest repository of bat coronaviruses in Asia.
Pictured: Wuhan Institute of Virology in Wuhan, in China's central Hubei province, during a visit by members of the World Health Organization (WHO) team investigating the origins of the COVID-19 coronavirus
+3

Pictured: Wuhan Institute of Virology in Wuhan, in China's central Hubei province, during a visit by members of the World Health Organization (WHO) team investigating the origins of the COVID-19 coronavirus

It later emerged she changed its name from another virus identified in a previous paper, thus obscuring its link to three miners who died from a strange respiratory disease they caught clearing bat droppings.

Prof Shi also admitted that eight more unidentified SARS viruses had been collected in the mine. The institute took its database of virus samples offline in September 2019, just a few weeks before Covid cases exploded in Wuhan.

A comment was made on social media after Colonel Cao published a paper on a fatal tick bite, saying he and Prof Shi 'can always find a virus that has never been found in humans', adding: 'I suspect this is another so-called 'scientific research' made in the laboratory.'

In recent years, China's military has ramped up its hiring of scientists after President Xi Jinping said this was a key element in the nation's march for global supremacy.

Lianchao Han, a dissident who used to work for the Chinese government, said Cao's involvement raised suspicions that military researchers who are experts in coronaviruses might also be involved in bio-defence operations.

'Many have been working with Western research institutes for years to steal our know-hows but China still refuses to share critical information a year after the pandemic has killed over three million.'

David Asher, an expert on biological, chemical and nuclear proliferation, who led State Department inquiries into the origins of Covid-19, said: 'The Chinese have made it clear they see biotechnology as a big part of the future of hybrid warfare. The big question is whether their work in these fields is offensive or defensive.'

Re: THE CCP IS THE VIRUS


“"I fancied myself as some kind of god....It is a sort of disease when you consider yourself some kind of god, the creator of everything, but I feel comfortable about it now since I began to live it out.” -- George Soros
Top
Post Reply
2 posts • Page 1 of 1