(TAC) Senator Joe Manchin wants to bring DHS’s spy on your neighbors, “If You See, Something Say Something” program to social media, blogs, websites, and much more. Manchin’s bill, the “See Something, Say Something Online Act” would essentially turn social media users into Federal spies by forcing them to report suspicious people to law enforcement.

Just how bad is this bill?

This bill would essentially force anyone on social media to report suspicious “transmissions” to law enforcement.

What exactly is a known suspicious transmission or major crime?

The term “suspicious transmission” means any public or private post, message, comment, tag, transaction, or any other user-generated content or transmission that commits, facilitates, incites, promotes, or otherwise assists the commission of a major crime.

How could social media users, bloggers, web forum moderators, web conferencing users, etc. know that a comment left or uttered by someone would later lead to them committing a major crime?

The See Something, Say Something Online Act would force social media users into red-flagging every person’s comments just in case someone commits a major crime in the future.

This bill would effectively destroy the First Amendment as we know it, dispelling any vestiges of America still being a free country.

Social media users would be forced to submit a Suspicious Transmission Activity Report (STAR) on suspicious individuals within 30 days.

As Reason warned, the See Something, Say Something Online Act would put reporting on your fellow American on steroids. It would create a glut of frivolous reports, including many that are politically motivated, or otherwise disingenuous.

“Each STAR submitted under this section shall contain, at a minimum— (1) the name, location, and other such identification information as submitted by the user to the provider of the interactive computer service; (2) the date and nature of the post, message, comment, tag, transaction, or other user-generated content or transmission detected for suspicious activity such as time, origin, and destination; and (3) any relevant text, information, and metadata related to the suspicious transmission.”

Retention Of Records —Each provider of an interactive computer service shall— (A) maintain a copy of any STAR submitted under this section and the original record equivalent of any supporting documentation for the 5-year period beginning on the date on which the STAR was submitted. (B) make all supporting documentation available to the Department and any appropriate law enforcement agencies upon request.”

No one can tell a person that they have been flagged as suspicious.

“Non-Disclosure—Except as otherwise prescribed by the Attorney General, no provider of an interactive computer service, or officer, director, employee, or agent of such a provider, subject to an order under subsection (a) may disclose the existence of, or terms of, the order to any person.”

Imagine someone leaving a comment on social media like the police suck or calling someone a bitch, twit or twat and then they go on to commit a crime in the future. Would anyone like to guess what might happen next?

Every social media user who refused to file a STAR report on a suspicious person would open themselves up to prosecution or a lawsuit.

“Compliance—Any provider of an interactive computer service that fails to report a known suspicious transmission shall not be immune from civil or criminal liability for such transmission under section 230(c) of the Communications Act of 1934 (47 U.S.C. 230(c)).”

Where does one begin when it comes to describing just how bad this bill is?

Forcing social media users to essentially submit STAR reports on people they deem as suspicious opens up a Pandora’s box of problems.

Social media users who are forced into reporting on people could flag everyone’s comments to guard against being prosecuted or sued. This bill, if passed as it is written, would have a devastating effect on the civil rights and freedoms of every American.

Say it ain't so, Joe. I used to be a strong supporter . . . now, you're just another kiss-up to the powers that be.
Top

The article seems to leave out that it’s cosponsored by the republican Cornyn and applies to companies not people.

Anyway I doubt it will pass.
Top

Milo wrote: ↑
Sun Feb 21, 2021 4:23 pm
The article seems to leave out that it’s cosponsored by the republican Cornyn and applies to companies not people.

Anyway I doubt it will pass.

Link? But lets assume you are correct... What other governments are notable for using Corporation to control their citizens? Two come to mind

AS far as passage that is to be seen. I wouldn't anything passed this government at this point.
“"I fancied myself as some kind of god....It is a sort of disease when you consider yourself some kind of god, the creator of everything, but I feel comfortable about it now since I began to live it out.” -- George Soros
Top

This passes and it is the end of free speech online in America. Gee I didn't see that coming. 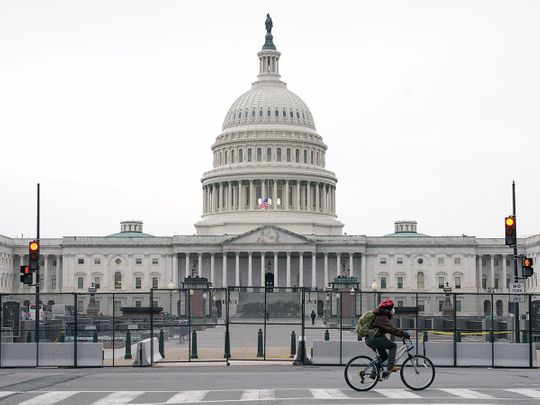 A new bill revitalizes the war on terror's favorite slogan in service of forcing tech companies to turn over more user data to the government. The "See Something, Say Something Online Act," introduced by Sen. Joe Manchin (D–W.Va.) and co-sponsored by Sen. John Cornyn (R–Texas), is the latest attack on the federal communications law known as Section 230 as well as freedom of speech and online privacy.

"Suspicious" content is defined as any post, private message, comment, tag, transaction, or "any other user-generated content or transmission" that government officials later determine "commits, facilitates, incites, promotes, or otherwise assists the commission of a major crime." Major crimes are defined as anything involving violence, domestic, or international terrorism, or a "serious drug offense."

For each suspicious post, services must submit a Suspicious Transmission Activity Report (STAR) within 30 days, providing the user's name, location, and other identifying information, as well as any relevant metadata.

Those submitting the user surveillance reports would henceforth be barred from talking about or even acknowledging the existence of them. STARs would also be exempt from Freedom of Information Act (FOIA) requests.

The bill, which comes amid renewed calls to stamp out domestic terrorism after the Capitol riot, is impressive in managing to be both completely invasive and utterly unconcerned with even appearing to be about protection, since the remedy—report within 30 days—would hardly help stop the commission of crimes. If we were talking about the Capitol riot, for instance, companies who still hadn't reported posts about it would be OK.

The bill would set up a massive new system of intense user monitoring and reporting that would lead to more perfectly innocent people getting booted from internet platforms. It would provide the government with a new tool to punish disfavored tech companies, and it would enlist all digital service providers to be cops in the failed post-9/11 war on terror and the drug war.

The bill states that some posts facilitating crimes require a STAR to be filed immediately, though it's vague about what these are (any "suspicious transmission that requires immediate attention" requires being reported immediately). The first example it provides is "an active sale or solicitation of sale of drugs."

A new federal agency would handle the suspicious activity reports—which could also be submitted by any individual, not just tech companies.

An easy, anonymous, online way for people to flag each other's social media accounts for the Department of Justice—what could go wrong? (Insert all the eye rolls here.)

Anyone with experience on social media now knows how hyperbolic people can be in describing threatening behavior, how gleeful folks can be in snitching on those they deem unenlightened, and how easy it can be for trolls, abusers, and other ne'er-do-wells to weaponize reporting systems against disliked individuals or marginalized groups. The See Something, Say Something Online Act would put this on steroids—all while ensuring such a glut of reports, including many that are frivolous, politically motivated, or otherwise disingenuous, that federal agents would still be searching for needles in haystacks.

We shall see.
“"I fancied myself as some kind of god....It is a sort of disease when you consider yourself some kind of god, the creator of everything, but I feel comfortable about it now since I began to live it out.” -- George Soros
Top

I hope I am dead before Big Brother finally takes over...
Top
Post Reply
7 posts • Page 1 of 1